I don't have a TV. I haven't been watching TV for more than 10 years. But I love to watch movies or great series like Dexter and Game of Thrones. Until recently, I watched movies or series on my 27" iMac. Twenty-seven inch is large for a computer screen but for a TV, it's quite small. 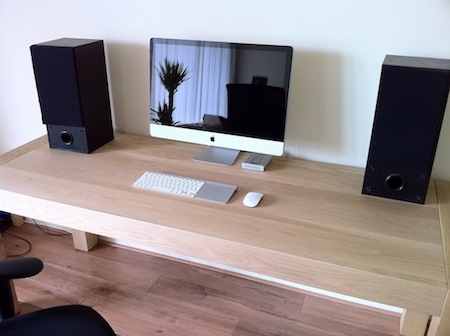 When it comes to watching movies, a bigger screen is always better. The big screen of a movie theater is the most important reason for movie enthousiasts to experience a movie in the theatre. But there is a way to get that movie theatre feel into your living room: get a digital projector. That's what I did.

I decided to get a ceiling mounted projection screen that I could lower just in front of my computer and table. I chose the "celexon Rollo Economy with a dimension of 277 x 156 cm (109 x 61 inch). This would give me a TV screen with a theoretical size of 125 inch in diameter! In practice, the actual projected image is around 120 inch. 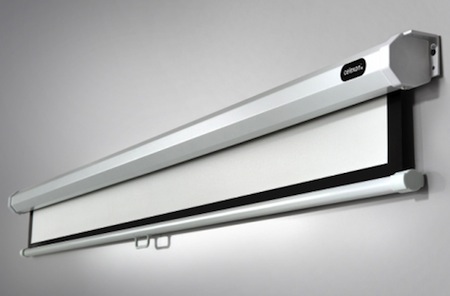 The screen can be lowered by just pulling on the edge. I have to reach for it on my toes but it's ok. As pictured below, the screen has an additional black area so it can be lowered further away from the ceiling. This way, the effect of the ceiling reflecting light back to the screen, reducing picture quality, is reduced. It allows you to have the screen at the desired hight, you don't need to look up. 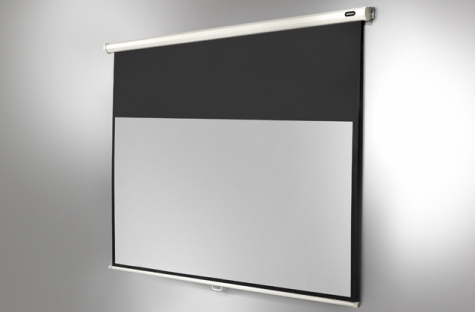 At the other end of the room, I decided to mount a projector on a ceiling mount. My iMac would sent all digital content through a long HDMI cable to the projector.

After doing some research I decided to buy the Panasonic PT-AT5000E also known as the PT-AE7000. This digital projector supports Full HD 1080p at 1920x1080. It also supports 3D but I'm not really interested in that. 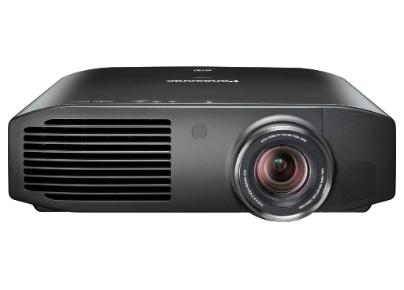 I do have some remarks about the whole setup with a digital projector:

But in the end I would not hesitate to fork out the money for a home theatre setup like this. Because of the downside of movie theatres:

So in my opinion, if you you are willing to spend money on it, I would advice to seriously look into getting a digital projector.