This blog is now running on solar power.

I've put a solar panel on my balcony, which is connected to a solar charge controller. This device charges an old worn-out car battery and provides power to a Raspberry Pi 3b+, which in turn powers this (static) website.

For updates: scroll to the bottom of this article. 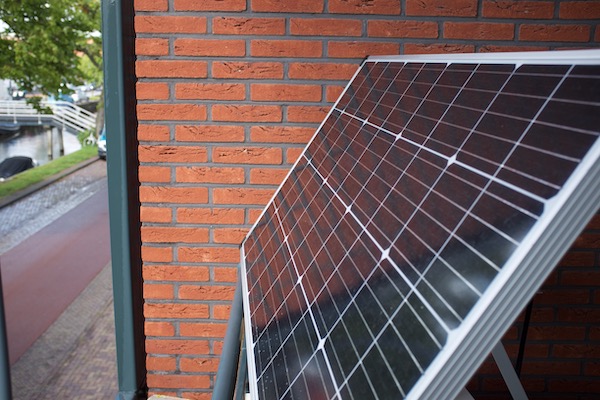 Some statistics about the current status of the solar setup is shown in the sidebar to the right. The historical graph below is updated every few minutes (European time). 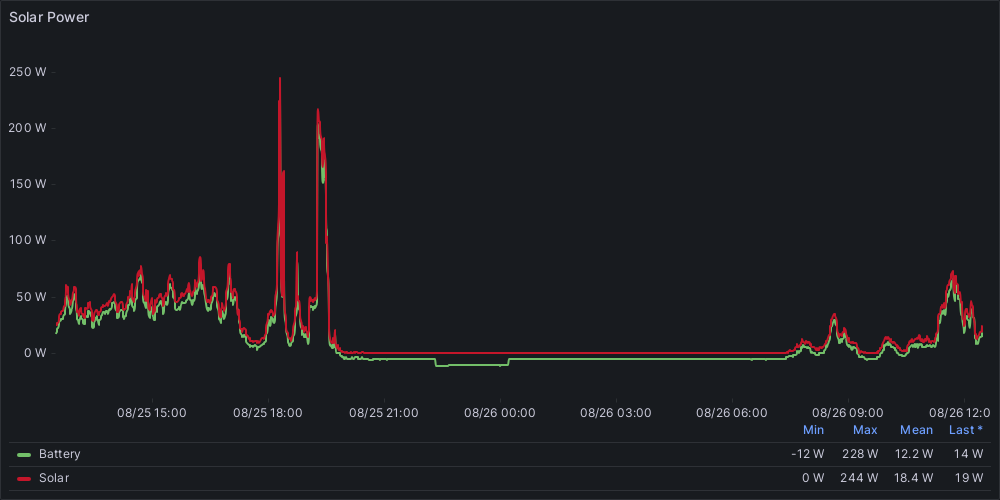 If you think you've seen a concept like this before, you are right.

The website Low-tech Magazine is the inspiration for my effort. I would really recommend visiting this site because it goes to incredible length to make the site energy-efficient. For example, images are dithered to save on bandwidth!

Low-tech Magazine goes off-line when there isn't enough sunlight and the battery runs out, which can happen after a few days of bad weather.

In January 2020, the site shared some numbers about the sustainability of the solar-powered website.

My build is almost identical to that of Low-tech Magazine in concept, but not nearly as efficient. I've just performed a lift-and-shift of my blog from the cloud to a Raspberry Pi 3b+.

I've build my setup based on some parts I already owned, such as the old car battery and the Pi. The solar panel and solar charge controller were purchased new. The LCD display and current/voltage sensor have been recycled from an earlier hobby project. 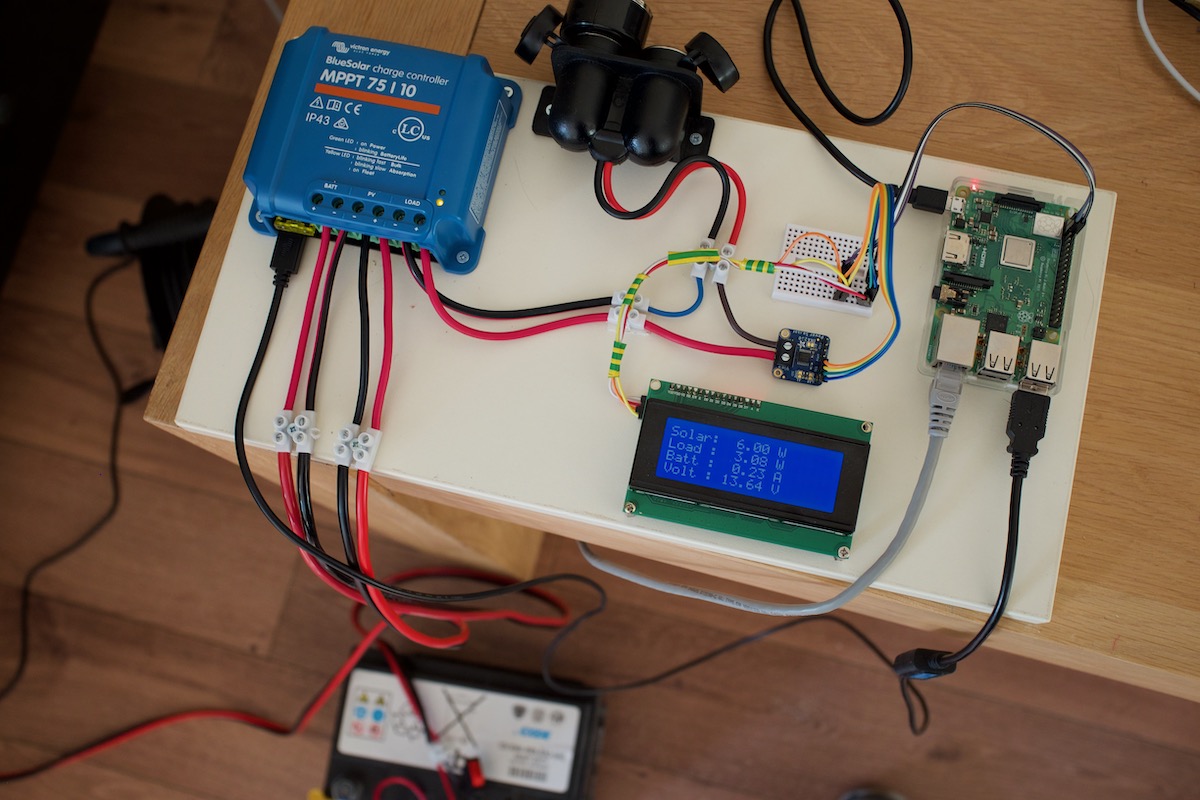 The panel is extremely over-dimensioned because my balcony is directed towards the west, so it has only a few hours a day of direct sunlight. Furthermore, the angle of the solar panel is sub-optimal.

My main concern will be the winter. It is not unlikely that during the winter, the panel will not be able to generate enough energy to power the Pi and charge the battery for the night.

I have also noticed that under great sunlight conditions, the panel can easily produce 60+ Watt1 but the battery cannot ingest power that fast.

I'm not sure about the actual brand of the panel, it was the cheapest panel I could find on Amazon for the rated wattage.

It's a standard solar charger made by Victron, for small solar setups (to power a shed or mobile home). I've bought the special data cable2 so I can get information such as voltage, current and power usage. 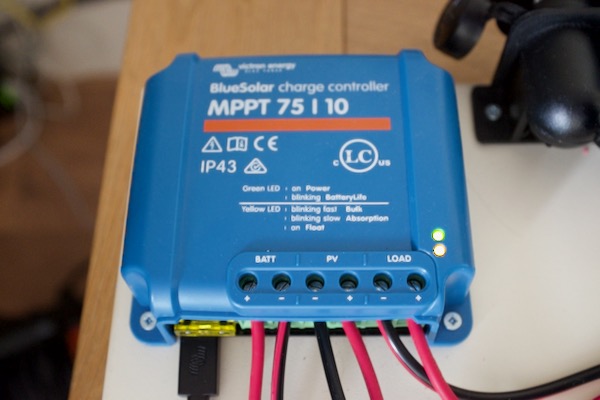 According to the manual, this solar charger will assure that the battery is sufficiently charged and protects against deep discharge or other conditions that could damage the battery.

I feel that this is a very high-quality product. It seems sturdy and the communications port (which even supports a bluetooth dongle) giving you access to the data is really nice.

The controller is ever so slightly under-dimensioned for the solar panel, but since I will never get the theoretical full power of the panel due to the sub-optimal configuration, this should not be an issue.

In the day and age of Lithium-ion batteries it may be strange to use a Lead Acid battery. The fact is that this battery3 was free and - although too worn down for a car - can still power light loads for a very long time (days). And I could just hook up a few extra batteries to expand capacity (and increase solar energy absorption rates).

To protect against short-circuits, the battery is protected by a fuse. This is critical because car batteries can produce so much current that they can be used for welding. They are dangerous.

You may understand why Lead Acid batteries aren't that great for solar usage, because you need to buy enough of them to assure you never have to deep discharge them.

I noticed that the load current sensor of the solar charge controller was not very precise, so I added an INA260 based sensor. This sensor uses I2C for communication, just like the LCD display. It measures voltage, current and power in a reasonable presice resolution.

Using the sensor is quite simple (pip3 install adafruit-circuitpython-ina260):

Please note that this sensor is purely optional, the precision it provides is not really required. I've used this sensor to observe that the voltage and current sensing sensors of the solar charge controller are fairly accurate, except for that of the load, which only measures the current in increments of 100 mAh.

The display has four lines of twenty characters and uses a HD44780 controller. It's dirt-cheap and uses the I2C bus for communications. By default, the screen is very bright, but I've used a resistor on a header for the backlight to lower the brightness. 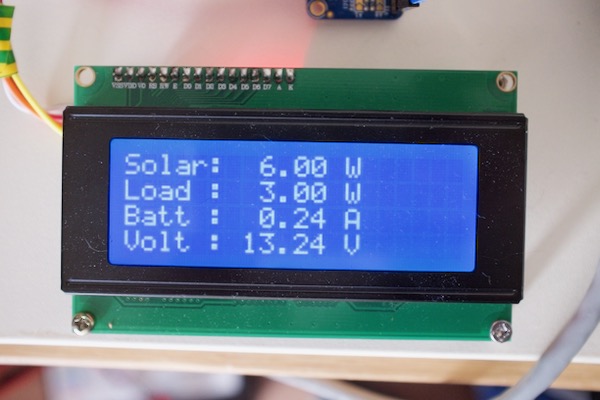 Using an LCD display in any kind of project is very simple.

I'm just using a simple car cigarette lighter USB adapter to power the Raspberry Pi 3b+. I'm looking at a more power-efficient converter, although I'm not sure how much efficiency I'll be able to gain, if any.

Update: I've replaced the cigarette lighter usb adapter device with a buck converter, which resulted in a very slight reduction in power consumption.

I've written a small Python script to collect all the data. The data is send to two places:

Because I don't want to wear out the SD card of the Raspberry Pi, the stats as shown in the sidebar to the right is written to a folder that is mounted on tmpfs.

The cloud as backup

When you connect to this site, you connect to a VPS running HAProxy. HAproxy determines if my blog is up and if so, will proxy between you and the Raspberry Pi. If the battery would run out, HAProxy will redirect you an instance of my blog on the same VPS (where it was running for years).

As you may understand, I still have to pay for the cloud VPS and that VPS also uses power. From an economical standpoint and from a ecological standpoint, this project may make little sense.

The obvious flaw in my whole setup is the need for a cloud VPS that is hosting HAProxy and a backup instance of my blog.

A better solution would be to only spawn a cloud VPS on demand, when power is getting low. To move visitors to the VPS, the DNS records should be changed to point to the right IP-address, which could be done with a few API calls.

I could also follow the example of Low-tech Magazine and just accept that my blog would be offline for some time, but I don't like that.

As long as the car battery is still fine, I have no reason to switch to Lithium-ion. I've also purchased a few smaller Lead Acid batteries just to test their real-life capacity, to support projects like these. Once the car battery dies, I can use those to power this project.

The rest of the network is not solar-powered

The switches, router and modem that supply internet access are not solar-powered. Together, these devices use significantly more power, which I cannot support with my solar setup.

I would have to move to a different house to be able to install sufficient solar capacity.

During good weather conditions, the solar panel provides way more power than is required to keep the battery charged and run the Raspberry Pi.

I've used the excess energy to charge my mobile devices. Although I think that's fun, if I just forget turning off my lights or amplifier for a few hours, I would already waste most of my solar gains.

I guess it's the tought that counts.

In the end, it it was a fun hobby project for me to realise. I want to thank Low-tech Magazine for the idea, I had a lot of fun creating my (significantly worse) copy of it.

If you have any ideas on how to improve this project, feel free to comment below or email me.

This blog post featured on hacker news and the Pi 3b+ had no problems handling the load.

After about two weeks the old and worn-down car battery finally died. Even after a whole day of charging, the voltage of the battery dropped to 11.5 Volts in about a minute. It would no longer hold a charge.

I have quite a lot of spare 12 volt 7Ah batteries that I can use as a replacement. I'm now using four of those batteries (older ones) in parallel.

As we approached fall, the sun started to set earlier and earlier. The problem with my balcony is that I only have direct sunlight at 16:00 until sunset. My solar panel was therefore unable to keep the batteries charged.

I even added a smaller 60 watt solar panel I used for earlier tests in parallel to gain a few extra watts, but that didn't help much.

It is now at a point where I think it's reasonable to say that the project failed in my particular case. However, I do believe it would still be fine if I could capture the sun during the whole day (if my balcony wasn't in such a bad spot, the solar panel would be able to keep up).

As the batteries were draining I decided to implement a backup power solution, to protect the batteries. It's bad for lead acid batteries to be in a discharged state for a long time.

Therefore, I'm now using a battery charger that is connected to a relais that my software is controlling. If the voltage drops below 12.00 volt, it will start charging the batteries for 24 hours.