To learn more about Ceph, I've build myself a Ceph Cluster based on actual hardware. In this blogpost I'll discus the cluster in more detail and I've also included (fio) benchmark results.

This is my test Ceph cluster: 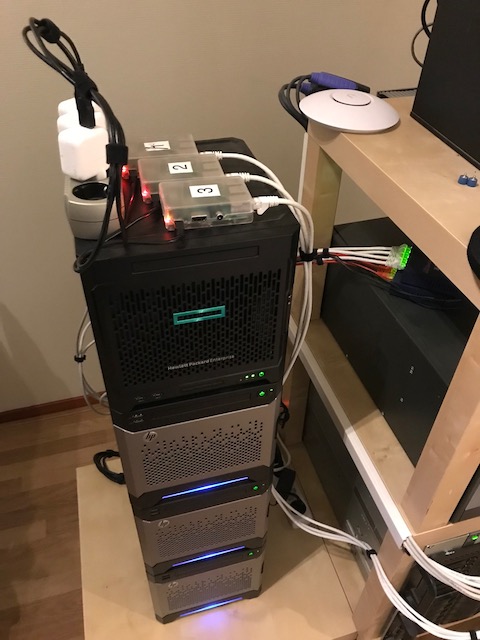 The cluster consists of the following components:

Note: Raspberry Pi's are not an ideal choice as a monitor node because Ceph Monitors write data (probably the cluster state) to disk every few seconds. This will wear out the SD card eventually.

The storage nodes are based on four HP MicroServers. I really like these small boxes, they are sturdy, contain server-grade components, including ECC-memory and have room for four internal 3.5" hard drives. You can also install 2.5" hard drives or SSDs.

For more info on the Gen8 and the Gen10 click on their links.

Unfortunately the Gen8 servers are no longer made. The replacement, the Gen10 model, lacks IPMI/iLO and is also much more expensive (in Europe at least).

All HP Microservers have a dual-core CPU. The Gen8 servers have 10GB RAM and the Gen10 server has 12GB RAM. I've just added an 8GB ECC memory module to each server, the Gen10 comes with 4GB and the Gen8 came with only 2GB, which explains the difference.

The systems all have an (old) internal 2.5" laptop HDD connected to the internal USB 2.0 header using an USB enclosure.

There is a fifth SATA connector on the motherboard, meant for an optional optical drive, which I have no use for and wich is not included with the servers.

I use this SATA connector in the Gen8 MicroServers to attach a Crucial 250GB SSD, which is then tucked away at the top, where the optical drive would sit. So the Gen8 servers have an SSD installed which the Gen10 is lacking.

All servers have two 1Gbit network cards on-board and a third one installed in one of the half-height PCIe slots1. 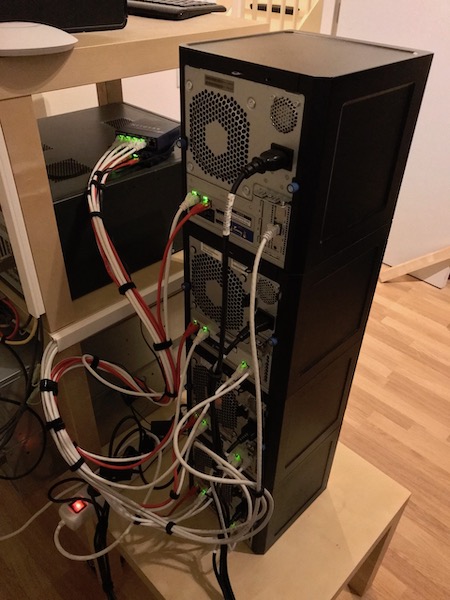 The half-height PCIe NICs connect the Microservers to the public network. The internal gigabit NICs are configured in a bond (round-robin) and connected to two 5-port Netgear gigabit switches. This is the cluster network or the backend network Ceph uses for replicating data between the storage nodes.

You may notice that the first onboard NIC of each server is connected to the top switch and the second one is connected to the bottom switch. This is necessary because linux round-robin bonding requires either separate VLANs for each NIC or in this case separate switches.

Click on the images below to see a larger version. 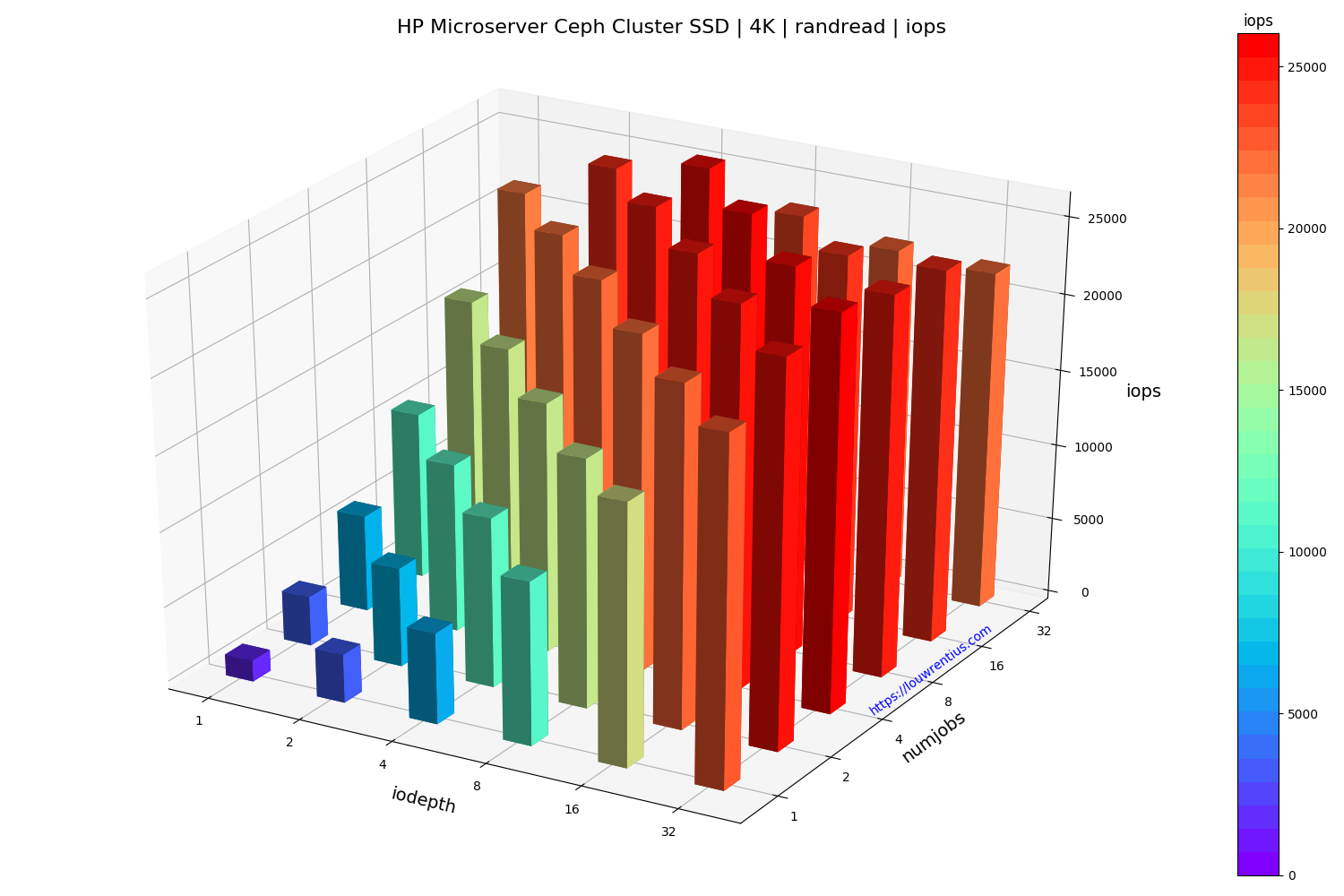 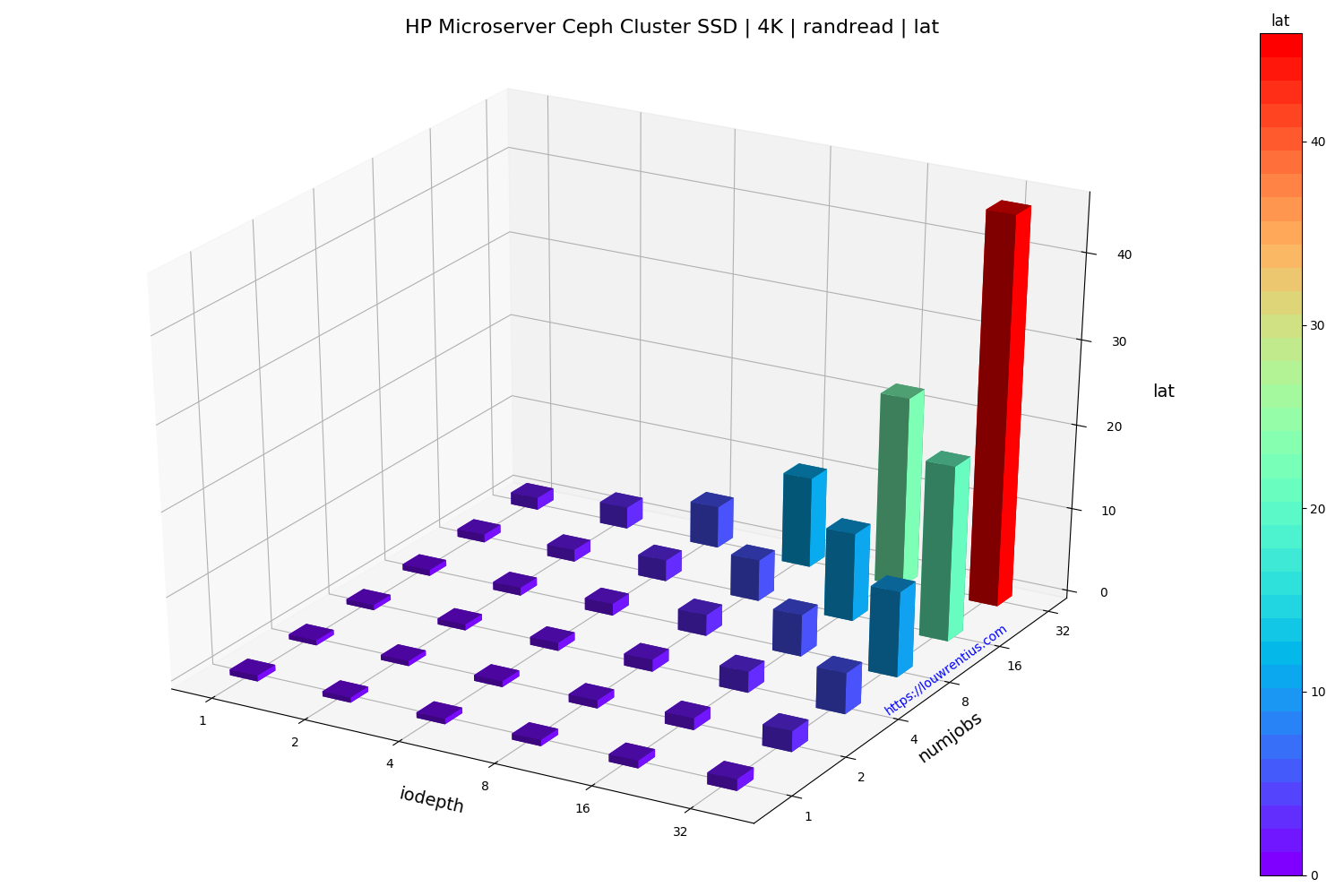 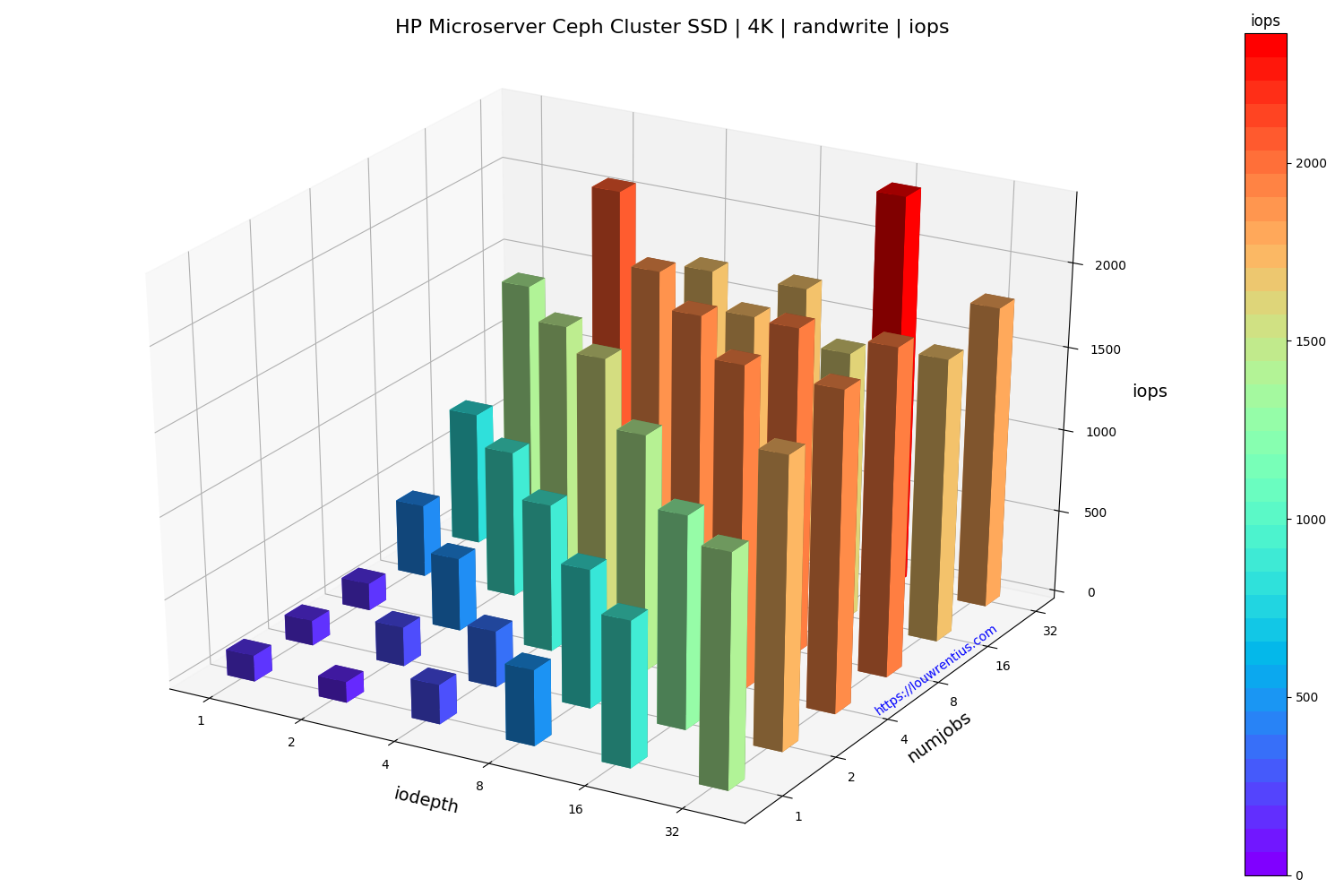 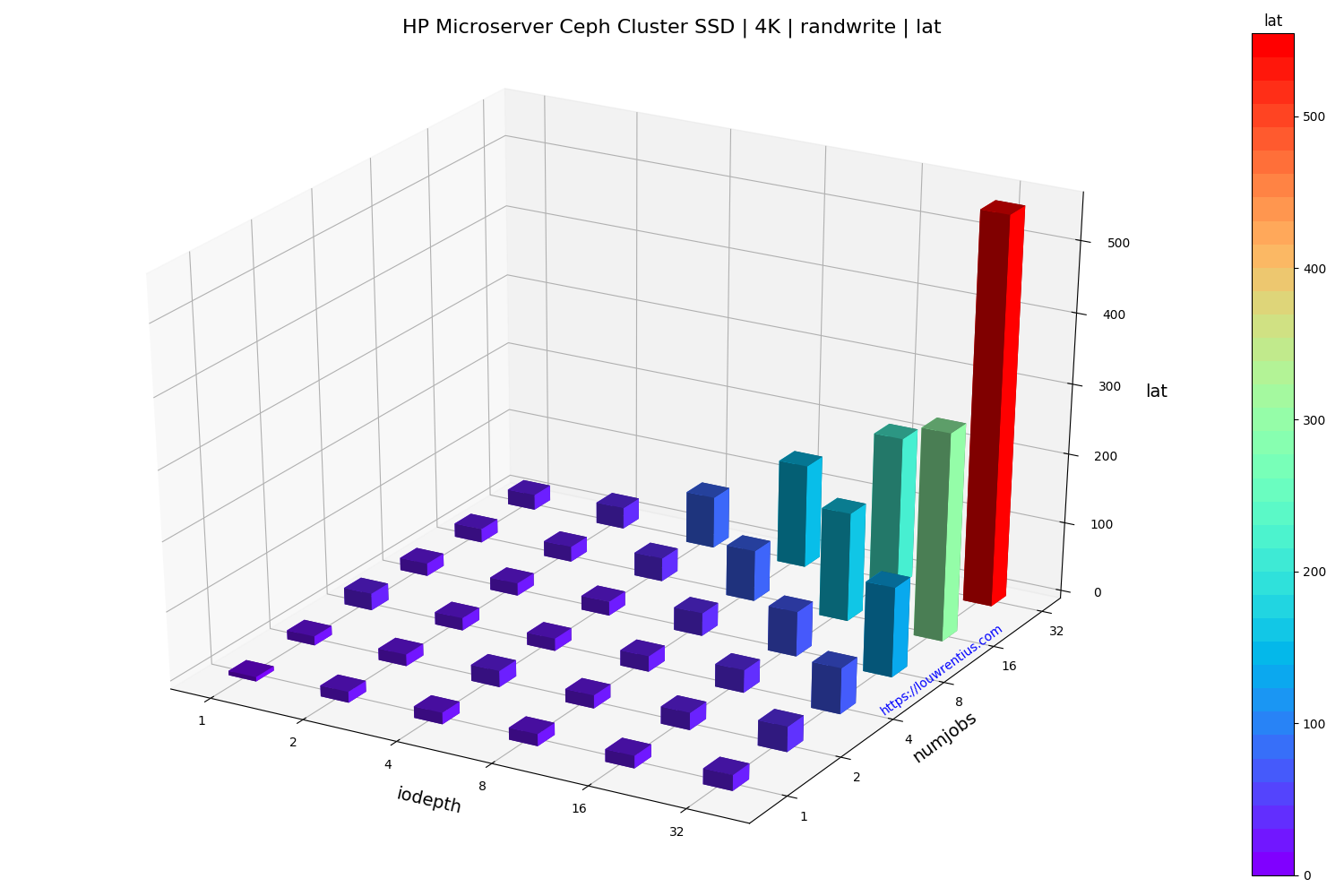 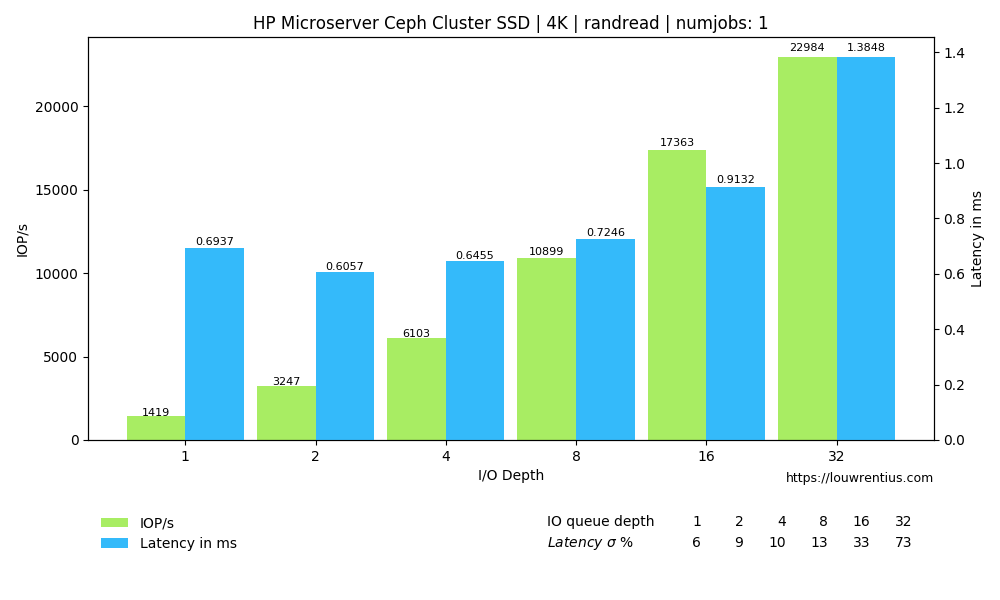 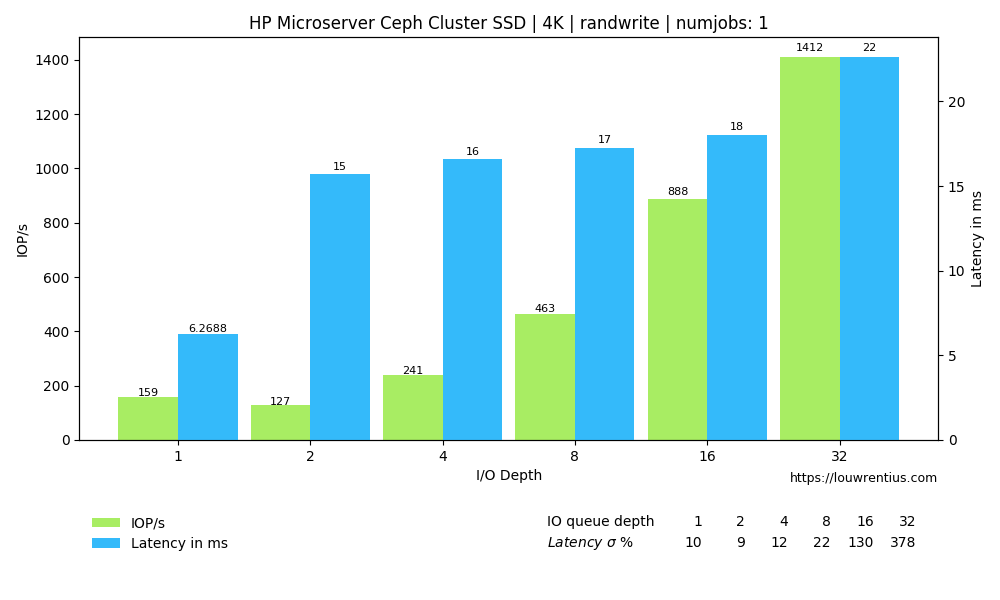 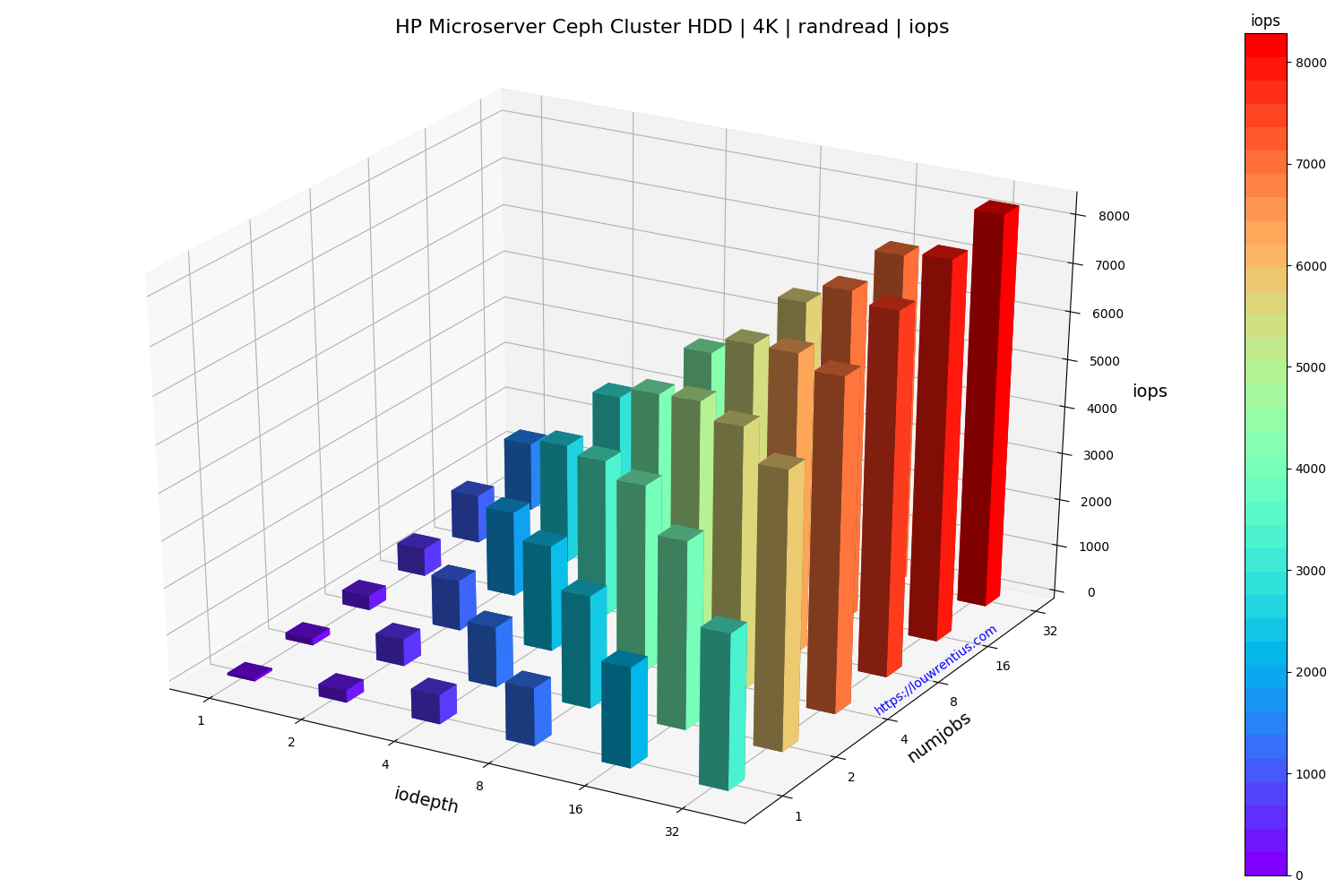 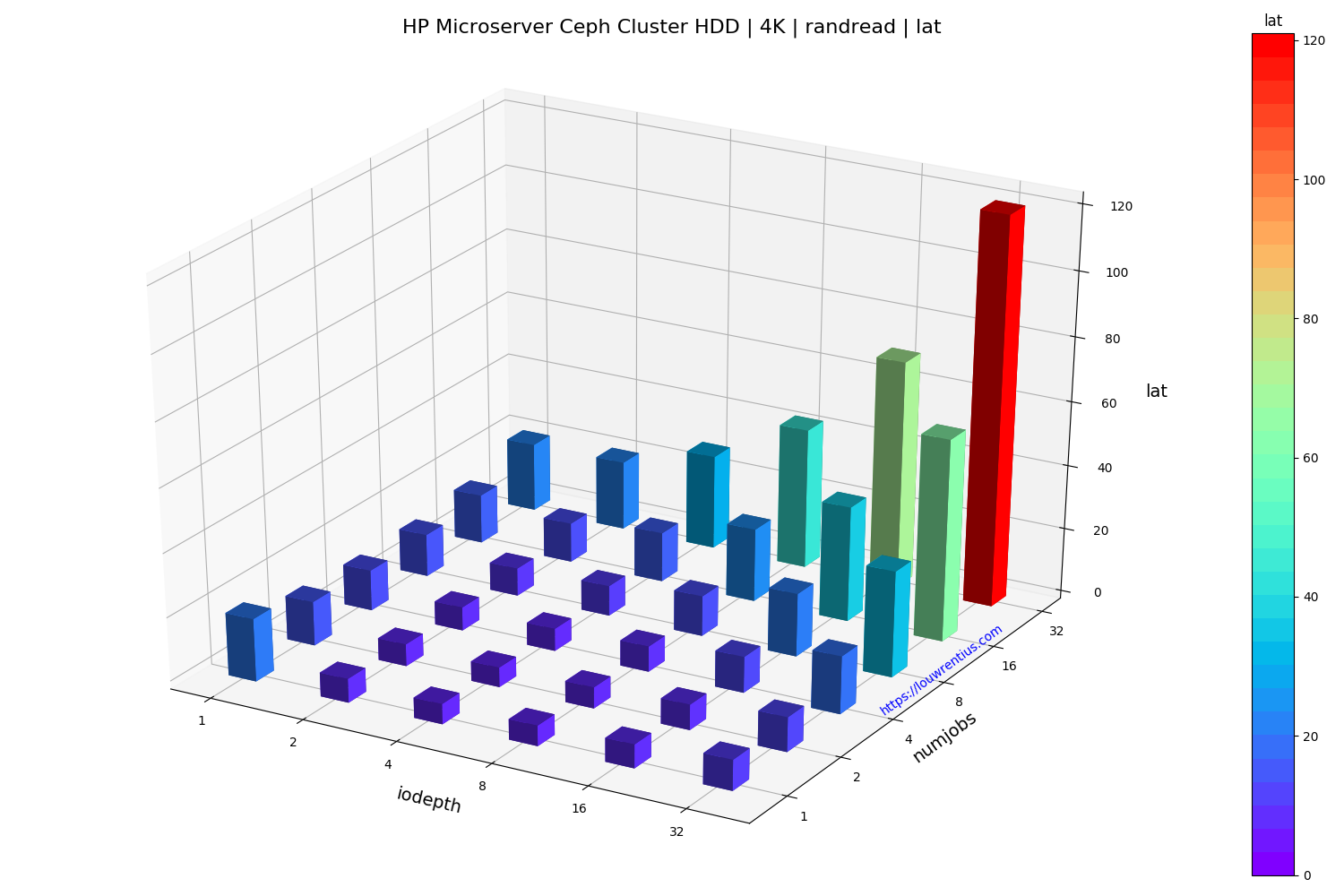 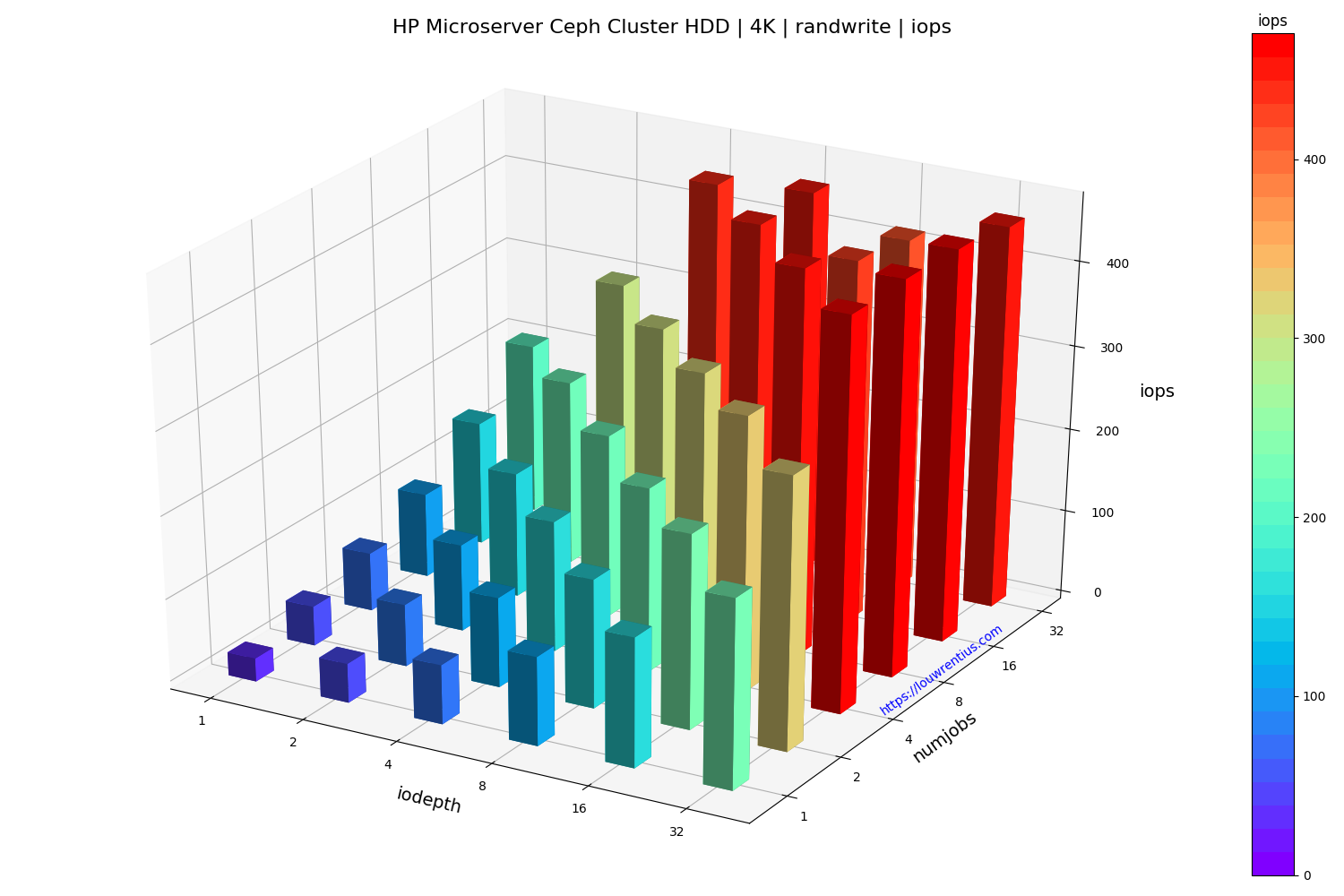 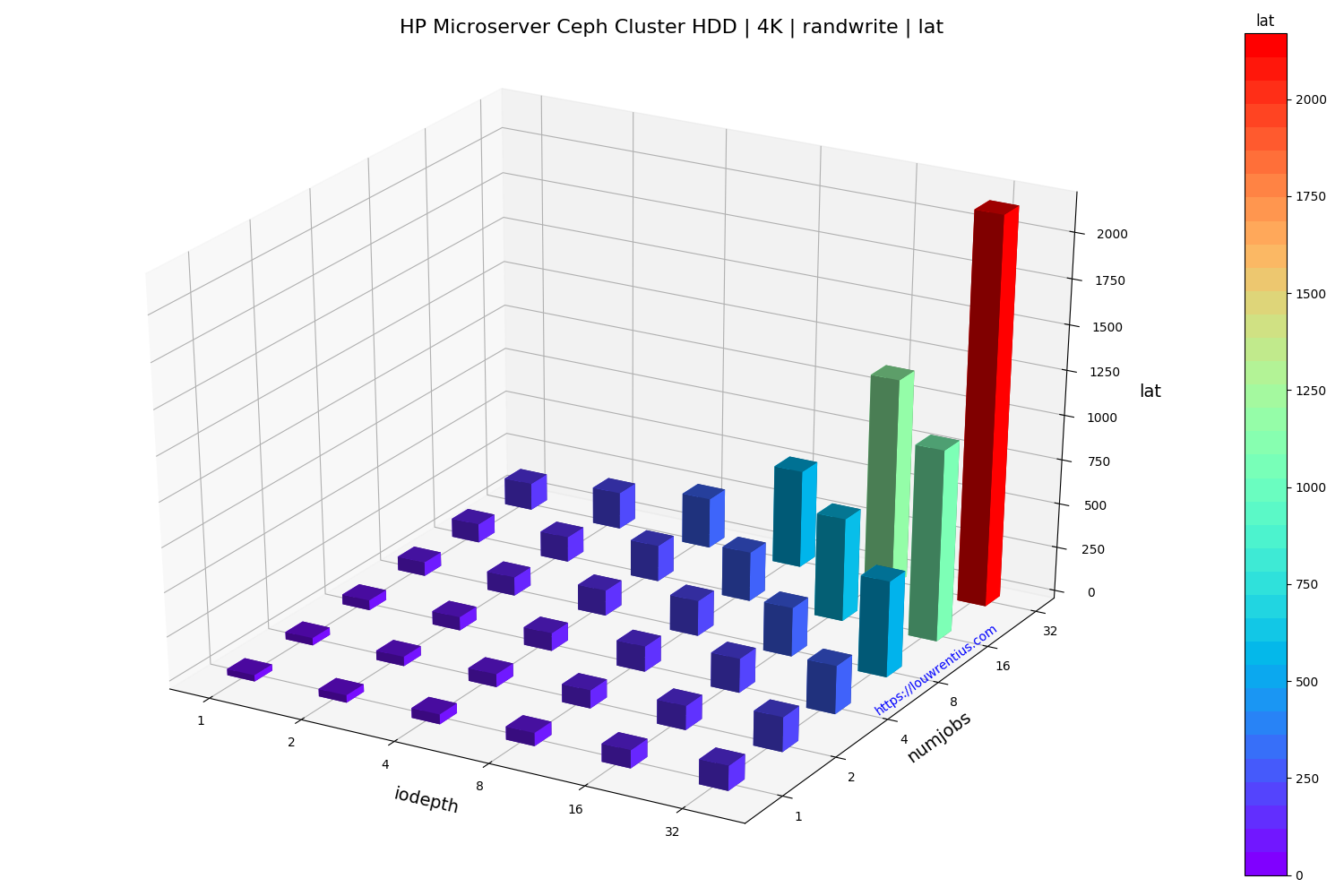 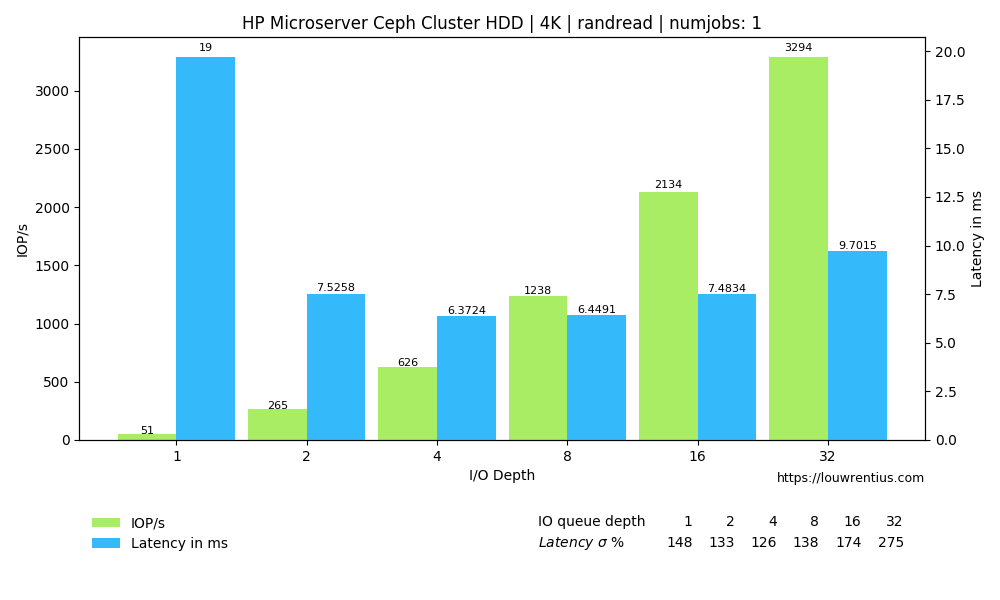 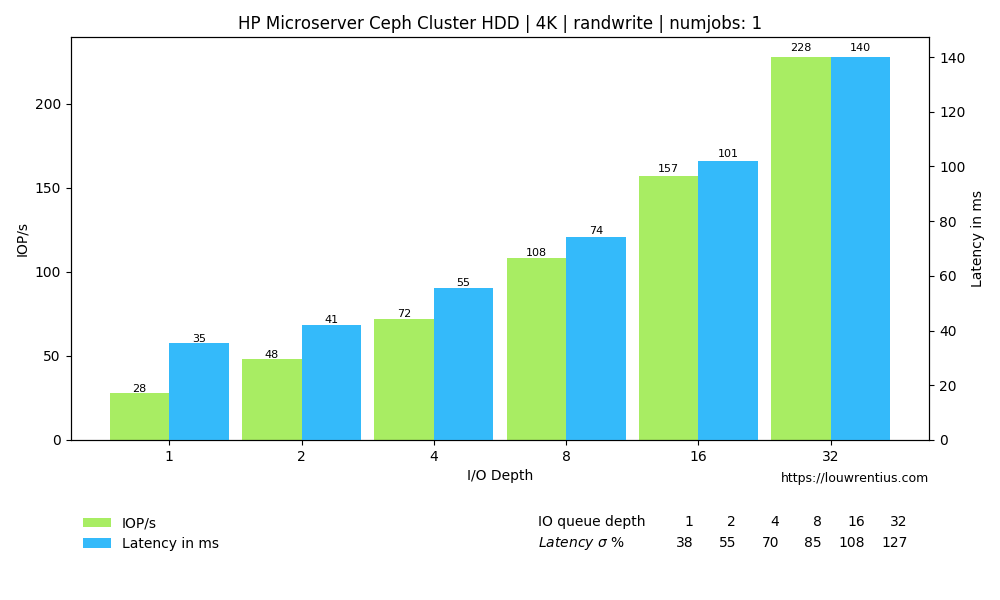 The random read performance of the hard drives seems unrealistic at higher queue depths and number of simultaneous jobs. This performance cannot be sustained purely on the basis that 16 hard drives with maybe 70 random IOPs each can only sustain 1120 random IOPs.

I cannot explain why I get these numbers. If anybody has a suggestion, feel free to comment/respond. Maybe the total of 42GB of memory across the cluster may act as some kind of cache.

Another interesting observation is that a low number of threads and a small IO queue depth results in fairly poor performance, both for SSD and HDD media.

Especially the performance of the SSD pool is poor with a low IO queue depth. A probable cause is that these SSDs are consumer-grade and don't perform well with low queue depth workloads.

I find it interesting that even over a single 1Gbit link, the SSD-backed pool is able to sustain 20K+ IOPs at higher queue depths and larger number of threads.

The small number of storage nodes and the low number of OSDs per node doesn't make this setup ideal but it does seem to perform fairly decent, considering the hardware involved.