Some products seem almost too good to be true and I think the HP Proliant Microserver N40L is one of them. If you are into the market for a very small, silent, efficient, yet capable home server, please take this device into consideration. I picked this device up for 200 euro's which is a bargain in my opinion.

First, take a look. As you can determine from the size of the 5 1/4 inch bay, this device is really small. The fun thing is though, that behind that door is room for four 3.5 inch SATA hard drives. 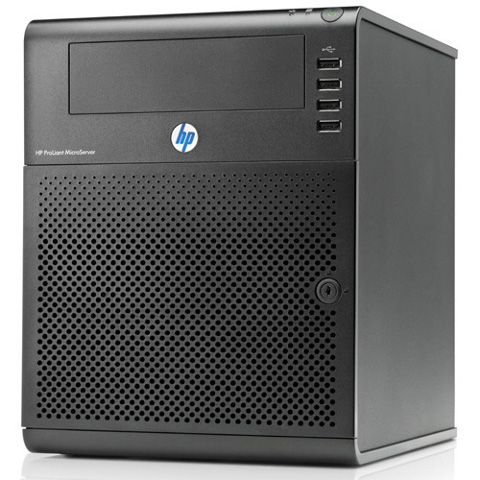 So you can put four large SATA disks into this device. It is just ideal as a home NAS, without resorting to expensive QNAP or Synology devices, which may not give you the flexibility you want. 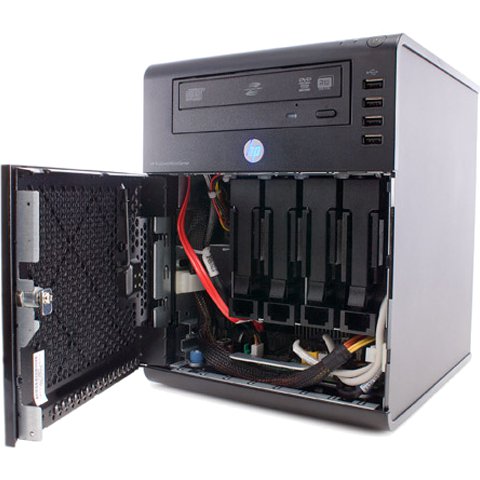 The on-board RAID controller only seems to support RAID 0 and RAID 1. If you want to make a NAS out of this device you want to go for RAID 5. So you have two options.

It contains the AMD equivalent of Intel's Atom processor, the Turion II Neo N40L dual-core, which runs at 1.5 Ghz. This CPU is not fast, but it is energy efficient and it helps keeping the device silent and cheap.

The device contains just 2 GB of ECC RAM. Sufficient for most tasks, but you can crank it up to 8 GB. The fact that you get ECC RAM in this device is a real plus, making this device extra reliable.

By default, a 250 GB disks is included. How they do that for this money is something I don't get. This disk takes up one of the four drive bays.

Personally, I would not use the 5 1/4 slot for an optical drive, (who uses them anyway in a server), instead, I would look into a solution where you can put the stock drive into that space, to make room for an additional disk for file storage. Useful in case you are building a NAS.

You may even install additional 2.5" disks with solutions like this. 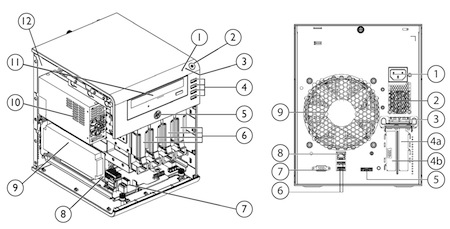 The device is very economic, I estimate power consumption at about 25 watt when idle. I measured 35 watt through my UPS, but there where also two external disk drives and a network switch connected to the UPS.

Noise levels are also excelent. There are just two fans. One very large fan at the back, that just seem to cool the entire device. The second fan is housed inside the tiny power supply, but although it is small, the fan makes little noise. When it is idle, you don't hear this server running.

I was able to install Ubuntu 12.04 LTS out-of-the-box. Is running fine. I didn't test any other operating systems.

I wanted to replace my Linux router (an old Mac Mini) with a device that can house two disk drives, so I could implement RAID 1. I use it as a Router/Firewall. But I also run a website on it, some monitoring software, so that's why I didn't want to buy a regular Linksys or Zytel embedded router.

Although this server has only one network interface, I use VLAN tagging with a VLAN-capable switch, so this is not a problem. Otherwise, I would just add a second Gigabyte half-height PCIe NIC.

It's an ideal device for any computer enthousiast who wants more flexibility than a standard NAS or embedded router can offer. It's cheap, small, silent and power efficient. Those HP engineers who created this device should get a thumbs up.