To be honest, 4 TB of storage isn't really necessary for home usage. However, I like to collect movies in full DVD or HD quality and so I need some storage.

I decided to build myself a NAS box based on Debian Etch. Samba is used to allow clients to access the data. The machine itself was initially based on 4 x 0.5 TB disks using the four SATA ports on the mainboard. With Linux build-in support for software RAID, I created a RAID 5 array, giving me 1.5 TB of storage space. Since a single movie is around 4 GB, the 1.5 TB turned out to become rather tight.

So I bought 4 x 1 TB disks and a Highpoint RocketRaid 2320 controller (SATA 4x). I put all 8 disks on this controller.

I wanted to create a single RAID 6 array using both the 1 TB disks and the 0.5 TB disks. I didn't want to create two separate array's because although it would have provided additional space, it wouldn't have given me the same safety level as RAID 6 does.

I mainly chose for RAID 6 since I cannot afford a backup solution  for this amount of data. I'm aware that RAID is no substitute for a proper backup, but it's an accepted risk for me. 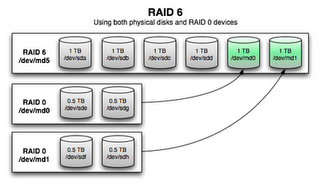 The only downside is that I had to skim a little bit of storage capacity of the native 1 TB drives, because 2 x 0.5 TB provides slightly less storage space than a single 1 TB disk. We're talking about something like 50 MB here, so It's not a big deal in my opinion.

The funny thing is that this array actually performs rather well. The disks are connected using a HighPoint RocketRaid 2320 controller. This controller is used just for it's SATA-ports, the on-board RAID functionality is not used. For RAID, I use Linux software RAID, using mdadm. This is how the RAID 6 array looks like:

And this is how this array performs:

With 229 MB/s read performance and 129 MB/s write performance using RAID 6, I think I should be content.