There are some reasons why you should consider buying true server-grade harware when building a server, wether it's for home or business use.

This is why I want to introduce you to the Supermicro X9SCM-F motherboard.

This motherboard costs about $160 or €160, which is more than a desktop grade motherboard, but you get quite a lot in return.

First of all, this motherboard has a separate network interface dedicated to an on-board Keyboard-Video-Mouse interface (IPMI). This interface allows you to power the server on or off, enter the BIOS all through a web interface, through the network. You never need to be in the vicinity of your server unless you need to perform some hardware maintenance.

All server grade hardware from manufactures like Supermicro, Dell or HP all ship their servers with ECC RAM. This type of memory is more expensive than regular RAM, but based on the name, you may guess the benefit: it detects and corrects memory errors. If you truly care about data integrity and availability, this is a recommended feature.

Support for both cheap or faster and more expensive processors

The cheapest solution seems to be the Intel Pentium G2030 @ 2.00 GHz. For only 72 dollar or 52 Euro it can be yours and it supports ECC memory. Performance is not stellar but sufficient for most NAS builds. More proof that a build based on ECC does not have to be expensive.

One step up the ladder is the Intel Core i3-3220. It retails for about $124 or €125 and it supports ECC memory, something I didn't suspect of the i3 series. At 3.3Ghz it's quite fast and it is a dual-core processor with hyper-threading support. The processor also supports virtualisation (VT-x), but it does not support I/O virtualisation (VT-d).

At $229 or €200 the Intel Xeon E3-1230 V2 cost you twice the price of the Core i3, but you get twice the processor cores (quad-core) with hyper-threading, turbo-boost up to 3.7 ghz and full virtualisation support (both VT-x and VT-d). For the money, you get a beast of a processor with ECC RAM support.

32 GB is quite some RAM and the maximum amount supported by the free version of VMware ESXi (ESXi 5.5 does not have this limit I've been told). Basically, it supports entry-level virtualisation needs or web-application needs. The 32 GB RAM limit is one of the biggest constraints of this platform, but may be sufficient for most applications except for large virtualisation loads or big databases.

32 GB is more than enough for everyone who likes to build a beefy storage server.

This is probably why the Supermicro X9SCM-F motherboard is so interesting for NAS or storage builders. It has four PCI-e slots in a 8x physical form factor. Two of them are PCI-e 2.0 4x in a physical 8x slot and the other two are true PCI-e 3.0 8x slots. But even a PCI-e 2.0 4x slot provides you with 4 x 500 MB/s = 2000 MB/s per slot. The 8x slots have 8 lanes at 985 MB/s each thus totalling almost 8 GB/s! Let's be honest: the PCI-e 2.0 4x provide more than enough bandwidth to power any disk controller or network interface.

Because there are four slots, there are several possibilities. For example, you could populate them with four IBM M1015 HBA's providing you with 32 SAS/SATA ports for a total of 32 disks. With the six on-board SATA ports, you could theoretically connect 38 disks.

If you put only 3 x IBM M1015 HBA's in the motherboard you will leave room for fast networking, like a quad-port gigabit network card. You can then put the four gigabit ports into Linux interface bonding to achieve 400 MB/s network transfer speeds. 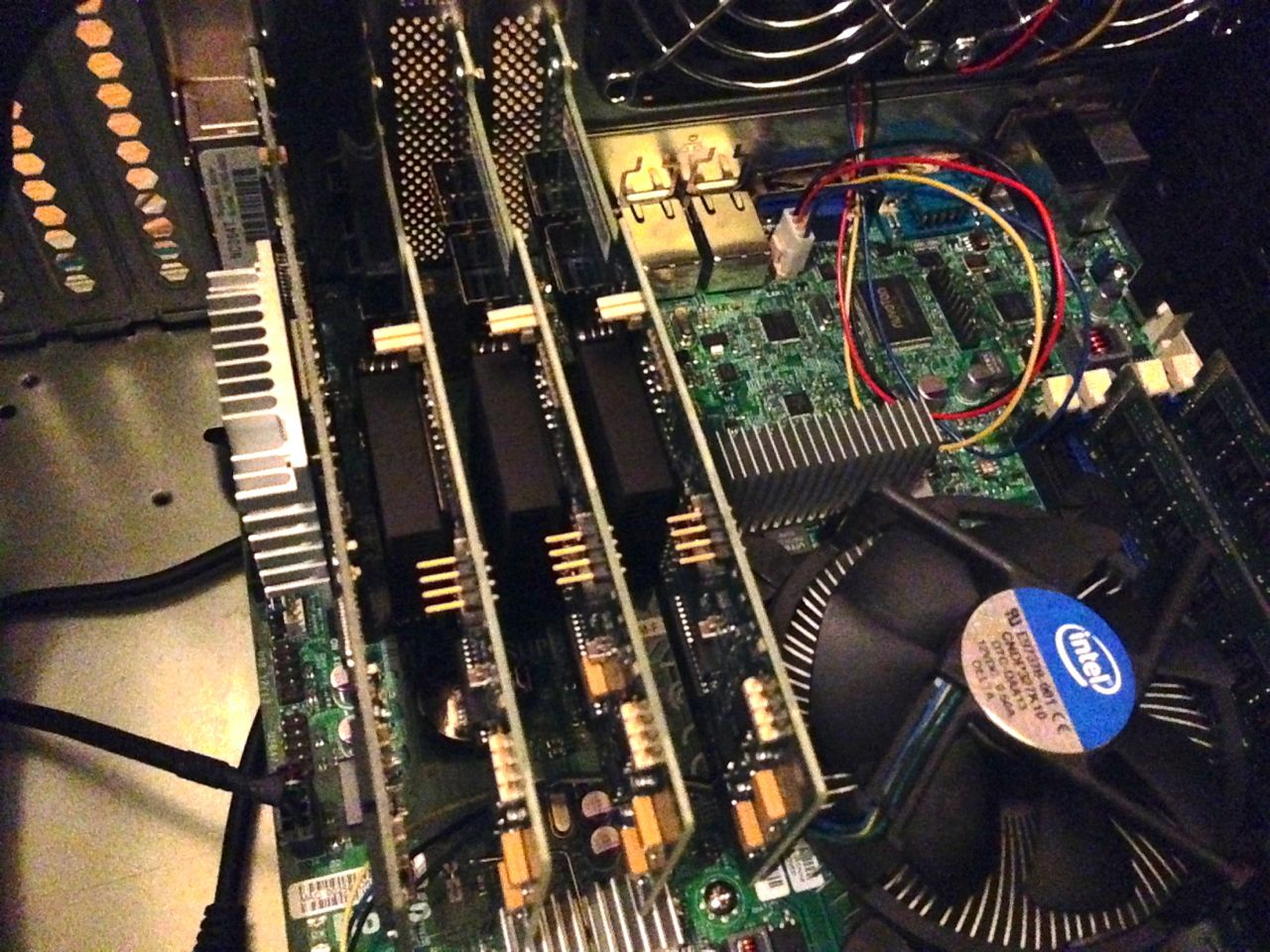 You could also consider to implement 10GB network cards (more expensive) or take a look into fibre channel or infiniband network connectivity.

With those four PCI-e slots, you can come a very long way.

The motherboard supports two on-board network interfaces and you can use them to bond them together for extra performance and/or fail-over.

You could also use one interface for regular LAN traffic and the other one for iSCSI or other protocols.